In the summer of 1942 the German forces in the East managed to surprise the Soviet High Command by attacking in the area of Army Group South. The Germans together with their Rumanian, Hungarian and Italian Allies overwhelmed the Soviet troops and advanced far in the Soviet South towards the oil producing areas of Baku.

However their efforts to clear the western part of the Volga were checked by the Soviet forces defending Stalingrad.

In November ’42 the Soviets, after secretly massing their forces, counterattacked and used their mobile forces against the flanks of the German front that were defended by the German Allied nations. The result was the collapse of the front and the encirclement of the Stalingrad troops.

How were the Soviets able to surprise their enemies? Didn’t German intelligence have any indication that powerful enemy forces were being moved close to the front?

It seems that through signals intelligence the Germans were able to identify major concentrations in the area. However this information was discounted by the analysts of the central evaluation department Fremde Heere Ost (Foreign Armies East) because it did not agree with their preconceived motions.

Let’s take a look at the relevant information.

The signal intelligence service of the Luftwaffe performed well in the Eastern front thanks to the low security of the Soviet AF cryptosystems. According to postwar reports they were also able to identify enemy concentrations faster than their Army counterparts because the aerial units assigned to ground troops could not hold radio silence.

Regarding the Stalingrad battle TICOM report I-41, p2 says: ‘Sigint units were the Cinderella of the GAF until the "STALINGRAD affair". III/LN. Rgt. 4 warned, and warned, that the Russians had assembled 5 Air Armies in the sector. After STALINGRAD, Sigint was held to be the main source of Intelligence.’ 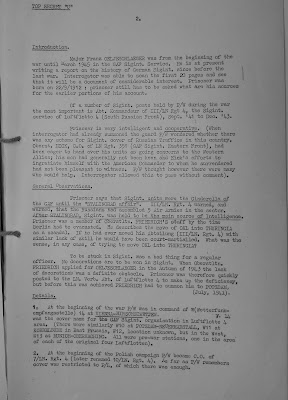 ‘3 .In the fall of 1942 the cryptanalytic section was able to determine the setting up of new Armies (62nd, 63rd, 64th, 65th… 69th) to the east of Stalingrad. Although these observations were constantly supplemented and confirmed, people at the highest level could not make up their minds to believe these reports. Only after the 64th army appeared in a sector of the front near Stalingrad was Foreign Armies East permitted to enter the other armies (with question marks!) on the chart of the Red Army and to present this at the discussion of the situation at the Fuhrer's headquarters without expecting to exposed to wild insults.’ 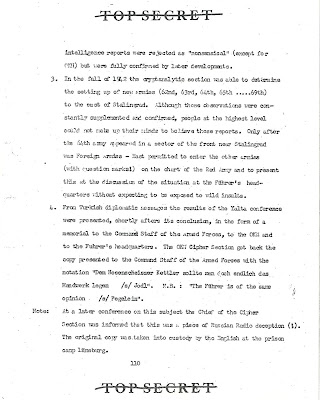 Are these statements correct or were the Germans exaggerating?

David Thomas in ‘Foreign Armies East and German Military Intelligence in Russia 1941-45’ has tried to evaluate the performance of the FHO by looking at the reports they issued during the war.

According to that article, p269: ‘Nevertheless, signals intelligence was the basic source for most FHO estimates of the enemy situation. Unfortunately, when the results of signal reconnaissance consisted of tactical indicators that contradicted the strategic indicators of enemy intentions upon which FHO had already based its assumptions, FHO refused in some instances to modify its existing evaluation to accommodate the results of signal reconnaissance. Stalingrad is the locus classicus. On 11 October, the Leitstelle fur Nachrichtenaufklarung reported a comprehensive regroupment of Soviet forces between the Don and Volga, including the establishment of a new Soviet field headquarters, 'Don Front'. FHO evaluated the insertion of this headquarters, the regrouping of Soviet units in the zone of the Soviet Sixty-Third Army, and the enemy movements in front of Fourth Panzer Army as 'defensive enemy behaviour'. Another signal reconnaissance report submitted to FHO in November confirmed the existence of a large grouping of Soviet forces behind the bridgehead of Serafimovich and provided clear evidence that the Red Army had recognized the weaknesses of, and the boundary between, the Rumanian and Italian armies to the north of Stalingrad. However, this evaluation contradicted the forecast of Soviet intentions and fighting strength submitted by Gehlen in late August, 'Gedanken zur Weiterentwick-lung der Feindlage im Herbst und Winter'; specifically, the fundamental assumption that the Red Army would be unable to mount more than one winter offensive, because of insufficient manpower reserves after the summer campaign season.’