Greece a country with rich history, beautiful islands and colorful people.Also a country with weak codes (at least in ww2).This is information that I found in EASI vols 1,3,4,6,7.It seems both military and diplomatic systems were compromised by the Germans.Also codes used by the Greek partisans were read.


84. Work on Greek traffic 1941-1944 Nearly all of our information concerning Greek systems comes from a report an Greek systems by Dr. Otto Karl Winkler who was a translator and cryptanalyst with KONA 4 from the spring of 1941 to May 1945.According to Dr. Winkler work on Greek systems started in 1941 when KONA 4 was stationed in Bucharest. The first system broken was a Greek Air Force system which consisted of a single transposition sent in 3-letter groups. Dr. Winkler stated that nearly all messages were read by the use of stereo-typed beginnings. Although the messages were of insignificant value, a continuous check on officer personalities, deliveries of stores and information concerning airfields contributed to tactical knowledge of the Greek forces. KONA 4 worked at this time also on Greek Army and Navy messages, but without success until the conquest of Greece. At that time, Winkler stated, ‘’codes’’ were captured which were used by the Greeks during the attack on Crete.


The only other Greek system mentioned as having been attacked in 1941 was a 5-letter code with a cyclic recipherment which Buggisch says he worked on at In 7/VI .Solutions were becoming rapid when the Greek campaign ended.After KONA 4 moved its Evaluation Center to Athens in May 1941, no more work was done by KONA 4 on Greek systems until the withdrawal of NAAS 4 from Athens in the autumn of 1943. At this time Greek Partisan traffic began to be intercepted. In the spring of 1944, KONA 4 gave Winkler the task of forming a small Greek unit to handle traffic of the Greek People's Army of Liberation ('ELAS"). The unit consisted of six persons, chief among whom were one Strobl, a cryptanalyst who worked on and solved a double transposition system of ELAS while Winkler concentrated on translating the traffic already readable. The work became more Important and the unit, now Increased to sixteen persons, was attached to a Close Range Signal Intelligence Platoon, NAZ G, newly formed in Salonika to cover wireless and line traffic of the Greek Partisans. Winkler stated that in the beginning the Greeks sent their traffic in two figure substitution with alternative groups.As few messages were sent on the same substitution, it took several days to break and read these substitutions. ELAS soon went over exclusively to letter traffic based on double transposition, which Strobl successfully solved largely through the aid given by the carelessness of the Greek cryptographers. Winkler estimated that 50-60%, of the traffic tackled by NAZ G was solved. From these messages, the unit was able to build up an almost complete picture of the organization and composition of the Greek People's Army of Liberation (ELAS) and the National Liberty Front ("EAM"). It also compiled lists of leading Greek personalities and officers and informed the competent German political and military authorities about many planned military and political actions, acts of sabotage, ambushes, dynamitings, etc. In addition, the messages provided information about the exact location of Allied airfields in the Greek mountains, about the position, strength, and activity of the Allied military missions and various British commando troops, about Greek internal and inter-allied crises and struggles, about the British tactics for the occupation of Greece, etc. Work on Greek systems ceased on 15 October 1944 when NAZ G vas transferred to Sarajevo.


ELAS was the military arm of the Communist party of Greece (KKE).During the occupation it was as interested in wiping out other resistance movements as it was in combating the Germans and Italians.


Greece.:According to Dr. Deubner, there were three main Greek diplomatic systems, all of which were read: an unenciphered five-letter code book (fifth letter for inflection only), carrying most of the traffic; an unenciphered four letter book, used mainly for traffic with Berne; and a four-figure book, used with bigram substitution, for traffic on the Moscow, Washington, Cairo and Ankara links.


Vatican, Greece: Around the beginning of the war, a desk was established for attacks on Vatican traffic. Seifert, a former member of the Austrian Cryptanalytic Bureau, joined OKW/Chi at the time of the Anschluss and broke a Vatican book.A small Greek desk existed under Cpl. Dr. Poetsgens .Seifert also seems to have concerned himself with Greek systems, and is said to have broken one or more Greek books. 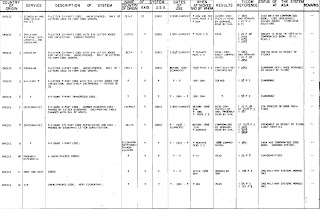